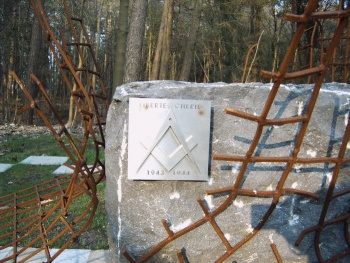 Liberté chérie was one of the very few Masonic lodges founded within a Nazi concentration camp during the Second World War.

The original seven Freemasons of Loge Liberté chérie were:

De Schrijver and M. Story arrived well after the establishment of the lodge and were not be founding members, but members only.

Paul Hanson was elected master. The brethren met for lodge work in Hut 6 around a table, which was otherwise used for cartridge sorting. A Catholic priest stood watch, so that the brethren could hold their meetings; and protected their secrecy.

Hut 6 was used for foreign Nacht und Nebel, (German: Night and Fog), prisoners. The Emslandlagercamps were a group of camps whose history is represented by a permanent exhibition in the Documentation and Information Centre in Papenburg, Germany. Altogether 15 camps were established on the Netherlands border, with central administration in Papenburg.

Luc Somerhausen described Erauw's intitiation, etc., as just as simple ceremonies. These ceremonies, (to whose secrecy they asked the community of Catholic priests for assistance, "with their prayers"), "took place at one of the tables. ... after a very highly simplified ritual—whose individual components were however explained to the initiate; that from now on he could participate in the work of the Lodge".

More than hundred prisoners were in Hut 6, and locked up nearly around the clock—allowed to leave only for a half-hour walk per day, under supervision. During the day, half of the camp had to sort cartridges and radio parts. The prisoners of the other half of the camp were forced to work under dreadful conditions in the surrounding peat bogs. The nutrition was so miserable that the prisoners lost 4 kg of body weight each month, on average.

After the first ritual meeting, with admission of the new brother, further meetings were thematically prepared. One was dedicated to the symbol of the Great Architect of the Universe, another "The future of Belgium", and a further, "The position of women in Freemasonry". Only Somerhausen and Erauw survived detention, and the lodge stopped "working" at the beginning of 1944.

Survivors Erauw and Somerhausen met again 1944 in the Oranienburg Sachsenhausen concentration camp, and remained inseparable from then on. In the spring of 1945 they were involved in the death marches, and although Erauw was 1.84 m tall, he weighed only 32 kg on 21 May 1945 — in the Saint Pierre Hospital in Brussels.

A memorial, created by architect Jean de Salle, was raised by Belgian and German Freemasons on 13 November 2004. It is now part of the memorial site of the Esterwegen Cemetery. Wim Rutten, the grand master of the Belgian Federation of the Le Droit Humain said during an address:

"We are gathered here today on this Cemetery in Esterwegen, not to mourn, but to express free thoughts in public. In memory of our brothers; human rights should never be forgotten."