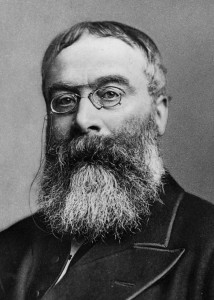 Walter Besant was a British writer and historian.

Besant was born on August 14th, 1836 in Potsmouth, Hampshire, England. He attended St. Paul's in Southsea and Stockwell Grammar in London. He went on to King's College London. In 1855 he was admitted to Christ's College, Cambridge. He graduated in 1859 from Christ's Church as a wrangler, an individual who attains first class honors in mathematics in their third year.

Besant went on to spend a year as a Mathematical Master at Rossall School and a year at Leamington College. He spent six years as a mathematics professor at Royal College in Mauritius, a country off of the southeast tip of Africa. In 1867 his health began to decline and he was forced to resign his position and returned to London.

In 1867 when Besant returned to England he married Annie Besant. Annie Besant was famous herself as a British socialist, theosophist, women's rights activist, writer, orator and supporter of Irish and Indian self rule.

From 1868 until 1885, Besant held the position of Secretary of the Palestine Exploration Fund, a group that was founded to explore and map Ottoman Palestine. They would report back to England areas that needed imporvment in the area. In 1871 he was admitted into the Honourable Society of Lincoln's Inn, a world renowned professional organization for judges and lawyers.

It was also in 1868, that Besant began publishing books. He wrote both fiction and non-fiction. In the fiction category he collaborated on several books with James Rice. Some of the books having great success. He also wrote on his own the book All in a Garden Fair, a book that Rudyard Kipling credited for inspiring him to leave India and became a writer full time. He had planned to write several books on the history of London, which remained incomplete at the time of his passing.