Difference between revisions of "En:Louis Goaziou" 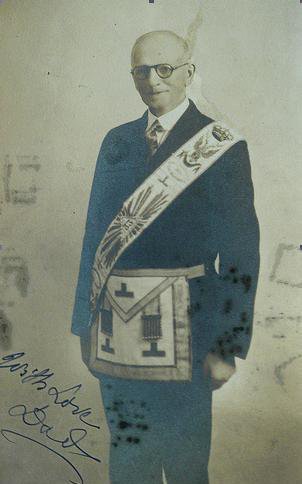 Louis pictured with Marie and family in the late 1890's

Darlene Pennline is the only person alive today with a living memory of her great-grandfather Louis Goaziou, a leading founder of North American Co-Masonry.

Pennline was about three when, carried in her mother’s arms, she was present just prior to his funeral in the apartment above his print shop on Fallowfield Avenue in Charleroi, PA. Pennline recalls she saw him lying in his casket, wearing his Masonic sash, sword and apron, and she wanted to run to him and kiss him, as was her habit when she saw him. She was too young to realize why her mother would not let her do so.

Her mother, understandably, was hesitant to let the toddler have her way but Pennline recalls she began to cry insistently and, childlike. So, to calm and placate her, her mother lowered Pennline into the casket and allowed her to kiss Goazoiu’s cheek. Even then, she didn’t understand she had just kissed him good-bye. “That’s my last memory of him,” she recalled during an interview in his Print Shop, recently reopened to the public.

When Louis Goaziou died in 1937, he was the long-time Grand Commander of the Co-Masonic American Federation of Human Rights, was still known as a one-time leader in the Socialist Press prior to World War I and was dimly recalled as a late 19th Century Anarchist writer and agitator. His memory was largely suppressed during the Red Scare of the 1950s when his family intentionally destroyed many of his political papers. They seem to have left intact many of his Masonic relics and, even more importantly, his print shop, now renovated and reopened to the public, thanks to the hard work of the Charleroi Area Historical Society.

Still called “Louis’ Print Shop”, the shop preserves – much of it in situ – items of great interest to a variety of historians. Intact are many of the printing devices, including the raw type, used in his day and largely available no where else. The walls of the shop remain stained with decades of black ink. Still there are his desk and chair, complete with his ledgers and books, either in his hand or that of his wife, Marie.

Louis’ Print Shop is considered one room in the larger Charleroi Historic district, the most important of the town’s approximately 1,800 buildings, explained Nikki Sheppick, who chairs the Charleroi Area Historical Society. She also is fondly known as the Society’s Administrator, researcher, "part time" creative carpenter-painter and all around worker.

In addition to its importance to Print Historians, Louis’ Print Shop is important to Charleroi-area history. It was here that much of the planning took place for what was known as the “Cooperative Store”, just a few blocks away. He also was a leading figure in what was known, in Charleroi, as “the French Colony”. Goaziou, though considered a bit combative for all his politics, also was known for his conciliatory nature. Many community discussions and activities centered around the print shop.

For more than a decade, the heart of North American Co-Masonry was where ever Louis Goaziou happened to be. Prior to the founding of AFHR’s headquarters in Larkspur, CO, in 1916, Louis Gaoziou often was in his Print Shop. He and his family lived in the apartment upstairs. It was there that his wife Marie, also a Co-Mason, died in 1917. The room and bed where he died in 1937 is carefully preserved at the shop.

Louis Goaziou was born March 22, 1864 in Scrignag County, in the French Province of Brittany. He was one of the youngest of many children of Pierre and Franciouse Chauvel Goaziou. His mother died when he was about two years old. His father soon placed him in the care of “three old maids” who raised him with an eye toward him becoming a priest. When he was 16, Goaziou, by then quite well educated and still in seminary, rejected the idea of holy orders and left, with four other boys about his age, for the United States.

Soon he was working in the anthracite coal mines of Houtzdale, Pennsylvania. At 19, he married the then 17-year-old Marie Bourgeois. By then, Goazoiu already had been part of his first strike and was well on his way to becoming a Union agitator, taking the side of Anarchy in what he clearly saw as a class war. He joined the Knights of Labor in 1886 and, at about that time, the United Mine Workers of America.

From then on, Goazious was a very active miners organizations, serving as delegate to various conventions and speaking on behalf of mine workers. He was a delegate to the Columbus convention in 1894 when the general mine strike was called and then was a delegate a few months later in Cleveland that settled the strike.

At the turn of the century, Goaziou participated in a series of public debates with Albert Delwarte, a well known Socialist. Though the outcome of the debates was considered inconclusive, Delwarte clearly made an impression on Goaziou, who left Anarchy in about 1900 and joined Delwarte in Socialism. Delwarte remained a strong influence in Goaziou’s life and, when Goaziou became a Freemason, so did Delwarte.

At about the same time he converted to Socialism, Goaziou started the most successful of his newspapers, L’Union Des Travailleurs (the Union of Workers). This publication apparently brought him to the attention of Antoine Muzzarelli, a French professor then living in New York who wanted to start Lodges in the US. In the winter of 1902, Muzzarelli initiated a correspondence with Goaziou. It seems Muzzarelli thought Goaziou would make a good Freemason. They corresponded for almost two years and that communication ultimately lead to the founding, on October 18, 1903, of Alpha Lodge 301, of which Goaziou was the first Master. The first four women Co-Masons in the United States were initiated in Alpha Lodge 301. These included Marie Goaziou.

Muzzarelli soon named Louis Goaziou as one of his deputies and, within five years, about 50 Lodges were started. The American Federation of Human Rights was incorporated Aug 7, 1907. Unfortunately, Muzzarelli was far better at starting Lodges than maintaining them and only about half were still working when he died tragically Oct 15, 1908, three days shy of the fifth anniversary of Alpha Lodge’s founding, leaving the fledging Masonic organization in near chaos.

Goaziou, the Freemason, is best known for bringing order out of this chaos. At the St Louis Convention held the month following Muzzarelli’s death, Goaziou was elected the Federation’s first president. The following year he was appointed representative of the Supreme Council of the International Order.

While this seems enough to keep any one person busy, Goaziou remained very active politically and in business. He spent much of this time at his print shop, which the Society said they know was in full operation in 1910. When AFHR’s headquarters was founded in 1916, following Goaziou’s decision to leave the Socialist party and concentrate all attention to Masonry, he spent much of his time in Charleroi and his print shop, by then run mostly by his son Heber. He died in his room over the print shop March 31, 1937.

With his death, recollection of Goaziou, outside of Masonry, began to fade. Most histories of the period mention him little at all and his family, frightened during the Red Scare and the decades that followed, talked of him only in whispers and destroyed much of his Socialist memorabilia. For a long time, only the two North American Co-Masonic bodies that recall him as a founder continued to cherish his memory.

All this began to change with the decline and fall of Communism. Historians began to more objectively study the period. Irwin M Marcus of Indiana University of Pennsylvania wrote several papers on Goaziou and his Union activities. Marianne Debouzy. In her book “In the Shadow of the Statue of Liberty: immigrants, workers, and citizens in the American Republic”, published in 1992 by University of Illinois Press, Debouzy called Goaziou “undoubtedly the most important figure of the French Anarchist and Socialist press.”

Meanwhile, back in Charleroi, Goaziou’s Print Shop was mostly idle with only the upstairs apartment being used for the last Goaziou still living in the Print Shop, Herbert Goaziou, for five years before his death in 2008. The shop soon was acquired from his estate by the Charleroi Historical Society. Earlier this spring, the shop opened for special tours of visitors interested in about Goaziou, Socialism, the history of printing in the US and, more and more, about the history of North American Co-Masonry.

The print shop is at 807 Fallowfield Ave, and its current open hour to visitors 11:30 a.m. to 4:30 p.m. Mondays and Fridays. Those days and hours are expected to grow as more volunteers are willing to docent. Anyone interested in more information may contact at the Charleroi Area Historical Society’s website here: http://charleroi-historical.org/

Please Note: Historical images are courtesy of the Charleroi Area Historical Society while the modern photos were taken by Bro Velma Foertsch and Bro Darylee Foertsch.