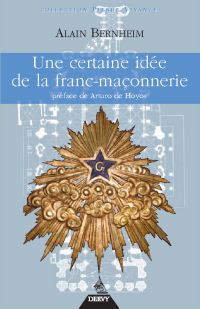 Alain Bernheim, born 1931 in Paris, France, lives in Montreux, Switzerland. At the age of twelve he was arrested by the Gestapo and sent to the infamous deportation camp Drancy, at fifteen he was chosen to represent the Lycée Janson-de-Sailly at the Concours Général of philosophy. He studied at the Conservatory of Music in Paris, was the first French music student to receive a Fulbright scholarship which allowed him to study further at the New England Conservatory of Music in Boston, MA won second Prize together with Vladimir Ashkenazy at the international piano contest in Bucharest in 1953 and gave some 2,000 concerts until 1980. Then he stopped his musical career for health reasons and turned to Masonic research.

In 1986 and 1993 he was awarded the Norman Spencer Award by the English premier Lodge of Research Quatuor Coronati Lodge N° 2076, 1997 the Certificate of Literature by the Philalethes Society (USA), 2001 the Albert Gallatin Mackey Scholar Award by the Scottish Rite Research Society (Washington, D.C.) which elected him a Fellow, and 2007 was selected a member of the Society of Blue Friars.[1]

A Freemason since 1963, he belongs to the Regular Grand Loge of Belgium and to the Swiss Grand Lodge Alpina. He was awarded the 33° by the Supreme Council of the United States (Southern Jurisdiction), elected a Chapter Knight of the Great Priory of Belgium and is a member of the Royal Order of Scotland.

Alain Bernheim , born in Paris and since 2002 a French resident in Switzerland, stopped his musical career in 1980 for health reasons after giving some 2,000 concerts and piano recitals. He was made a Mason in 1963, belongs to Lodge No. 82, Evolutia, in Montreux (Swiss Grand Lodge Alpina) and was elected WM of Lodge No. 30, Ars Macionica (Regular Grand Lodge of Belgium) in 2006, and is a honorary founding member of the Grand Lodge of Mauritius. He is a 33°, Inspector General Honorary of the Supreme Council (S. J.), Visitor General Honorary and Chapter Knight of the Great Priory of Belgium, and a member of the Royal Order of Scotland.

The Scottish Rite Research Society made him a Fellow and presented him with the Albert G. Mackey Award for Excellence in Masonic Scholarship in 2001. He was elected a member of the Masonic Brotherhood of the Blue Forget-Me-Not in 1996 and a Blue Friar in 2007.

On Tuesday, October 6, 2009, the Scottish Rite Research Society (SRRS) during its annual meeting in the Congressional Room of the Capital Hilton Hotel in Washington (D. C.), awarded Ill. Alain Bernheim, 33° the Albert Gallatin Mackey Award "for Lifetime Achievement", a distinction which was awarded five times only since the SRRS was founded and never before to a non-American Brother. Read Bernheim's speech: My Approach to Masonic History

Quatuor Coronati Lodge No. 2076, London, awarded him the Norman Spencer Prize twice (1986 and 1993) and he is presently a full member and an Officer of the Lodge.