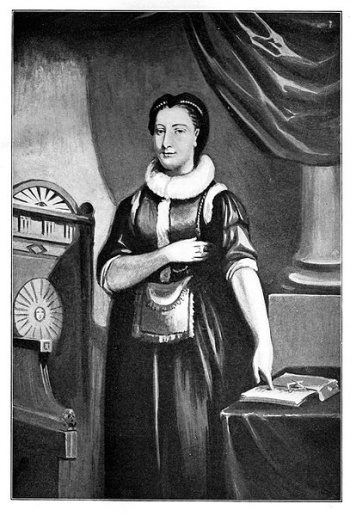 "Lady Freemasons. -The following is from Tit Bits, London, January 9th :-I have read that there has never been but one lady known to have been admitted into the mysteries of Freemasonry; doubtless, others of your readers have read the same, and it may be interesting to those who are Freemasons to know that the writer of this article has attended a Lodge to which belonged, as subscribing members, several ladies.

During the winter of 1887-8 I was at Port Mahou in one of Her Majesty's ships, and with others received an invitation to visit the Freemasons' Lodge on shore. We accepted the invitation, and, upon being ushered into the Lodge after the usual ceremonies, were rather surprised to see several ladies seated in the Lodge and wearing the regalia of their Order.

In the working of the Lodge the ladies took exactly the same share of work as their sterner brethren would have had to have done had there been no ladies to take upon themselves the work, and they did their duty in quite as good a manner as men would have done. Two of the ladies had infants in arms, so there were at least two cowans in that Lodge.

At the conclusion of the ceremonies, I conversed with the Master of the Lodge, who was a Spanish military officer exiled during the Carlist troubles, and he informed me that quite a number of ladies on the island (Majorca) were Freemasons, that the Order was worked more after the system of our society of Oddfellows, and that they were peculiarly a benefit society among themselves, helping each other out of the Lodge funds when necessity compelled - in fact, working the affair in a manner in which a great many people begin to think Freemasonry should be worked.

I have been in various Lodges in and about the world, but this is the only time that I was ever in the company, or knew of any living ladies who had been regularly initiated into the mysteries of the craft. As I previously said, I was not the only Englishman present, so that in case of any doubt about the foregoing article I can forward the names of the other Masons who saw this uncommon sight.

[The writer is wrong in supposing that only the one lady, Miss St. Leger, was ever initiated. There are a few other well-known and authenticated cases, but the fame of the Irish lady seems to overshadow and eclipse the others. We have attempted to place ourselves in communication with the writer of the article, but the editor of Tit Bits has, unfortunately, not preserved the address. Can any reader of Ars supply further data? -EDITOR.]"