All in all that is all there is to the letter G. But I have found that if you make things to simple people tend to take them as unimportant.

I have not been able to determine when the letter G was introduced into Speculative Masonry as a symbol.

The letter G is not derived from the Operative Masons of the Middle Ages, and formed no part of the architectural decoration of old cathedrals. 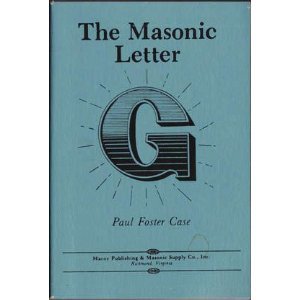 Whether it entered the symbolism under the influence of those Rosicrucian’s and Qabalists who joined the Order during the last half of the 17th century, or whether it was introduced at some time subsequent to 1717, when the first Grand Lodge was established at the Apple-tree Tavern in London, is impossible to tell.

The letter G is the initial of Geometry. This makes it a symbolic summary of the entire Masonic system. The heart of Freemasonry is a doctrine founded on the science of geometry. In the old Masonic Constitutions it is specifically stated that Masonry and Geometry are one and the same.

It is no secret that the letter G is a symbol for the Deity. It so happens that God is the English name of the Grand Architect of the Universe. The fact that G is the first letter of God is not the only connection between the symbol and the Deity.

Its Greek equivalent is the initial of Gaia, the earth Mother, eldest born of Chases, whose name is the root of the noun geometria, geometry.

Gimel, the Hebrew correspondence to G, is the initial of gadol, majesty, and of gebur, strong, words used to designate the Deity throughout the Hebrew sacred writings. Gimel itself is regarded by the wise men of Israel as being the alphabetical sign of the sacred wisdom which is founded on the science of geometry.

When I was raised to a Master Mason, I was told to learn the following lesions:

The Pot Of Incense Symbolizes man, the pot being the physical body, the Incense being the mind of man, and when they are lit, the heat given off being the spirit of man as given to him by God.

The Beehive Symbolizes unity of purpose, with just one leader, for life and just one goal, the betterment of the hive.

The Anchor And Ark The Anchor is an emblem of Jesus Christ who gave his life to ensure us a safe harbor to find rest in. The Ark is an emblem of God, that divine ark that carries us through a lifetime of trials and tribulations, and finally to our Heavenly home.

The Sword Reminds us that we should be ever watchful and guarded in our thoughts, words, and actions, because all of these will be recorded in the Great Book of Life, that all men are judged by when" they die.

The Scythe Is used as an emblem of Death but it is in reality an emblem of transition from one life to another. Because as this mortal life comes to an end it brings with it the beginning of a spiritual life.

When I went through York Rite Masonry, it was explained to me the meaning of all these lesions.

When I went through my reception into Scottish Rite Masonry, even more lesions were taught and explained to me.

When I was admitted to the Thirty-Third Degree, came the Surprise of my life. No more lesions, no more explanations, I was only told to remember a few simple facts and to do one thing, which changed my whole outlook on life.

Believing this I feel that I will be “A life time Apprentice” my whole life. When the time comes to return this physical body back to the ground from wince it came.

The sprit that lived in this body will be returned to God as a “Fellow Craft” and then at the feet of God the labors of my sprit will be judged by God.

Then and only then, if God finds the work of my sprit as “true work, good work”, will my sprit be raised from a dead level to a living perpendicular on the angle of a square by God.

In this belief, I will live my life as “A life time Apprentice”, always trying to subdue my passions and learning to improve myself.