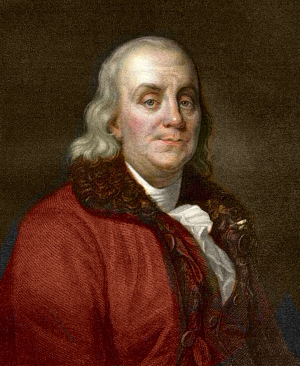 Benjamin Franklin was born in 1706 at Boston. He was the tenth son of a soap and candle maker. He received some formal education but was principally self-taught. After serving an apprenticeship to his father between the ages of 10 and 12, he went to work for his half-brother James, a printer. In 1721 the latter founded the New England Courant, the fourth newspaper in the colonies. Benjamin secretly contributed 14 essays to it, his first published writings.

In 1723, because of dissension with his half-brother, Franklin moved to Philadelphia, where he obtained employment as a printer. He spent only a year there and then sailed to London for 2 more years. Back in Philadelphia, he rose rapidly in the printing industry. He published The Pennsylvania Gazette (1730-48), which had been founded by another man in 1728, but his most successful literary venture was the annual Poor Richard 's Almanac (1733-58). It won a popularity in the colonies second only to the Bible, and its fame eventually spread to Europe.

Meantime, in 1730 Franklin had taken a common-law wife, Deborah Read, who was to bear him a son and daughter, and he also apparently had children with another nameless woman out of wedlock. By 1748 he had achieved financial independence and gained recognition for his philanthropy and the stimulus he provided to such civic causes as libraries, educational institutions, and hospitals. Energetic and tireless, he also found time to pursue his interest in science, as well as to enter politics.

During the years 1757-62 and 1764-75, Franklin resided in England, originally in the capacity of agent for Pennsylvania and later for Georgia, New Jersey, and Massachusetts. During the latter period, which coincided with the growth of colonial unrest, he underwent a political metamorphosis. Until then a contented Englishman in outlook, primarily concerned with Pennsylvania provincial politics, he distrusted popular movements and saw little purpose to be served in carrying principle to extremes. Until the issue of parliamentary taxation undermined the old alliances, he led the Quaker party attack on the Anglican proprietary party and its Presbyterian frontier allies. His purpose throughout the years at London in fact had been displacement of the Penn family administration by royal authority-the conversion of the province from a proprietary to a royal colony.

It was during the Stamp Act crisis that Franklin evolved from leader of a shattered provincial party's faction to celebrated spokesman at London for American rights. Although as agent for Pennsylvania he opposed by every conceivable means the enactment of the bill in 1765, he did not at first realize the depth of colonial hostility. He regarded passage as unavoidable and preferred to submit to it while actually working for its repeal.

Franklin's nomination of a friend and political ally as stamp distributor for Pennsylvania, coupled with his apparent acceptance of the legislation, armed his proprietary opponents with explosive issues. Their energetic exploitation of them endangered his reputation at home until reliable information was published demonstrating his unabated opposition to the act. For a time, mob resentment threatened his family and new home in Philadelphia until his tradesmen supporters rallied. Subsequently, Franklin's defense of the American position in the House of Commons during the debates over the Stamp Act's repeal restored his prestige at home.

Franklin returned to Philadelphia in May 1775 and immediately became a distinguished member of the Continental Congress. Thirteen months later, he served on the committee that drafted the Declaration of Independence. He subsequently contributed to the government in other important ways, including service as postmaster general, and took over the duties of president of the Pennsylvania constitutional convention.

But, within less than a year and a half after his return, the aged statesman set sail once again for Europe, beginning a career as diplomat that would occupy him for most of the rest of his life. In the years 1776-79, as one of three commissioners, he directed the negotiations that led to treaties of commerce and alliance with France, where the people adulated him, but he and the other commissioners squabbled constantly. While he was sole commissioner to France (1779-85), he and John Jay and John Adams negotiated the Treaty of Paris (1783), which ended the War for Independence.

Back in the United States, in 1785 Franklin became president of the Supreme Executive Council of Pennsylvania. At the Constitutional Convention, though he did not approve of many aspects of the finished document and was hampered by his age and ill-health, he missed few if any sessions, lent his prestige, soothed passions, and compromised disputes.

In his twilight years, working on his Autobiography, Franklin could look back on a fruitful life as the toast of two continents. Energetic nearly to the last, in 1787 he was elected as first president of the Pennsylvania Society for Promoting the Abolition of Slavery-a cause to which he had committed himself as early as the 1730s. His final public act was signing a memorial to Congress recommending dissolution of the slavery system. Shortly thereafter, in 1790 at the age of 84, Franklin passed away in Philadelphia and was laid to rest in Christ Church Burial Ground.