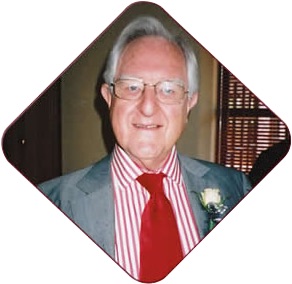 Member since 1971. Initiated in Goldfields Lodge 2478 EC. Has held several offices in the District Grand Lodge of the Transvaal (now South Africa North), PDSGW and recipient of the District Grand Master’s Certificate of Service in 2002.
Past master and founder (and Charter JW) of two lodges, being the Lyceum Lodge of Research 8682 and Exsequi Lodge 8994. Almoner, chaplain and organist of both lodges for several years.
Past Master of Doornfontein Mark Lodge. 1337, PDGSoj. Treasurer and organist.
Past Z of Transvaal Jubilee R.A.Chapter 6143. PDGSN. Organist.
Supreme Ruler for 2015 of Centenary Golden Harvest Conclave 398, Order of the Secret Monitor.

Has taken part in many Masonic and other play productions and has written a number of Masonic papers several of which were delivered and published by Lyceum Lodge and other lodges- some in open meetings for masons, ladies and visiting gentlemen (in accordance with current Grand Lodge Policy) including:

And from David Lewis: