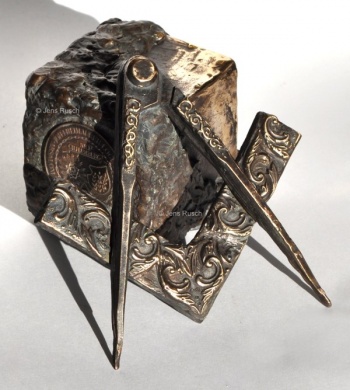 This bronze was created by Br Jens Rusch as a reminiscence of the founding fathers of German Freemasonry at the occasion of the 275th anniversary of the founding of the first German Masonic lodge in Hamburg. Workshop "Royal Art".

Jens Rusch made a craft vocational training and since 1972 has worked as a freelance artist. From 1979 to 1982 he studied etching techniques as a master student of the painter and graphic artist Eberhard Schlotter in Altea in Spain. Apart from his studio in Brunsbuttel in northern Germany Jens Rusch also works frequently in Spain. In Spain he had until 1998, a second studio, located at the Costa Blanca, in the eastern Spanish province of Alicante in the mountain village Callosa de Ensarriá, where he is working now occasionally.

In the early 2000's Jens Rusch overcame a cancer disease, which influenced his artistic development. As a result he organized, since 2004 among other things, the "Wattolümpiade" ("Tideland Olympics") as a fundraising event for the Schleswig-Holstein Cancer Society.

Rusch illustrated, among other publications, Theodor Storm's »The Rider on the White Horse«, Goethe's Faust, Arno Schmidt's School of Atheists and the Carmina Burana, composed by the German composer Carl Orff. His "Rider on the White Horse" illustrations were taken over by six textbook publishers, they also appeared in an English textbook edition, as well as in a Korean license issue. At a public presentation of the Korean edition of the Rider on the White Horse in Brunsbuttel Mr. Gerd Evers from the Husum Theodor Storm Society praised the commitment of the artist.
His work has been shown in numerous exhibitions at home and abroad, including in Colombia and Romania.