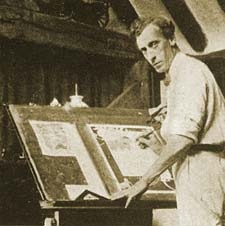 "Gran'pop discloses the secrets of Masonry."

These humorous post cards come from the "Gran Pop" series and is titled "Gran'pop discloses the secrets of Masonry." They are English/Australian in origin and plays on the theme of telling and keeping secrets.

This post card pokes fun as "Grandpop goes thru the chair" literally! As Masons we know they are really talking about going through the Officer line to become the Worshipful Master.

English comic-artist [Clarence] Lawson Wood (23 August 1878 - 26 October 1957) illustrated Gran'pop the "artful" ginger ape in the Gran'pop's Annual series written by Arthur William Groom and published by Dean, & Son Ltd., London, from 1935 to 1950. Undated, each book was about 124 pages and profusely illustrated. At least one illustration, if not a series, depicts Gran'pop in a masonic setting. Unfortunately an example is not available.

His illustrations were frequently reprinted as postcards, posters, and a wide range of novelty items, as well as on the covers of such magazine as Colliers. An active member of the London Sketch Club, with Tom Browne, and a member of the Royal Institute of Painters in Watercolours, Wood showed with Walker's Galleries, Brook Street Art Gallery and at the Royal Academy. In 1934 he was awarded a Royal Zoological Society fellowship for his active work with animals and their welfare.