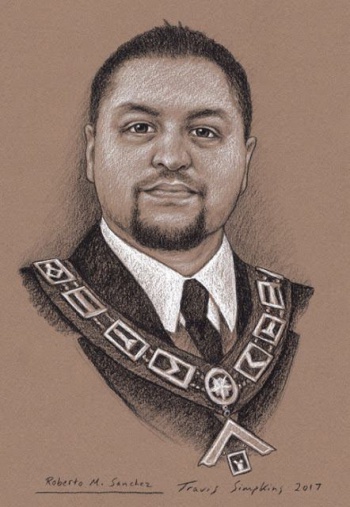 Portrait made by Bro Travis Simpkins

Roberto M. Sanchez is a very active Freemason. He is a Past Master of two masonic lodges and has presided over 30 different masonic organizations.

Roberto has traveled the world exploring Freemasonry and has given lectures on the subject all over the United States and across Latin America, Canada and Europe. Roberto was the original Curator, Historian and Librarian for the Houston Masonic Library Museum and served on the Board of Directors and Executive Committee.

Roberto Mercurio Sanchez was born on September 17 1983, to Eugenio and Maria Sanchez in Mexico City, Mexico. He has one younger brother, Fernando Sanchez, who is Roberto’s best friend. In July of 1992 Roberto and his family moved to Houston, Texas, and since then Roberto has been proud to call Houston home. Roberto attended Houston public schools and graduated from Westside High School in 2002. He is a very avid Rugby player and has played for the Texas select Under 19 team, the University of Houston as well as the University of St Thomas, H.A.R.C. and the Houston Wonderers. Roberto Graduated from the University of Houston, where he received a Bachelors of Arts Degree in History as well as a Bachelor of Arts Degree in Psychology.

Roberto, or “Mr. Mason” as he is known to some, is a very active Freemason. His Masonic journey began in Gray Lodge No. 329 when he was initiated as an Entered Apprentice on June 30th, 2005, Passed to the degree of Fellowcraft on October 12th, 2005, and Raised to the Sublime Degree of a Master Mason on November 19th, 2005. Roberto received an "A" certificate in the esoteric work from the Grand Lodge of Texas and has held a certificate since 2006. Roberto served as Worshipful Master of Gray Lodge No. 329 in 2011-2012. For the 2013-2014 Masonic year Roberto served as President of the Master's Warden's and Secretaries Association of the 30th Masonic District in Houston, Texas as well as Worshipful Master of St Albans' Lodge No. 1455 in College Station, Texas.

He has also served as Secretary of Gray Lodge No 329 in Houston, Texas, and as Secretary of Memorial Lodge No 1298 in Houston, Texas for several years. After R.W. Walter Rogers' election as Grand Junior Warden, he appointed Roberto to serve on his 2013 Grand Lodge Planning Committee. Roberto served the Grand Lodge of Texas and the 2013 Grand Master Walter W. Rogers as District Deputy Grand Master of Masonic District No. 30-B. He is also serving on a 7-year term for the Fraternal Relations Committee - a permanent committee of the Grand Lodge of Texas.

In 2017, Most Excellent Jackie Mathews appointed Roberto as District Deputy Grand High Priest for District 8 of the Grand Chapter of Texas. For the 2015 Cryptic year Roberto served the Grand Master of the Grand Council of Texas, Richard Sharp, as his Grand Marshal; he has also received the Super Excellent Master degree (2006), Order of High Priesthood (2010) and Order of the Silver Trowel (2010) where he is currently serving in the advancing line as Sentinel. Roberto was knighted as a Knight Templar in Ruthven Commandery No. 2 where he served as Eminent Commander in 2012 and was awarded the Meritorious Service award for his efforts; he also received the Knights Preceptors degree (2012) and the Knight Crusaders of the Cross (2015).

Roberto is a member of Chinar Grotto M.O.V.P.E.R. where he served as the presiding officer, Prophet Monarch in 2013. He currently serves as Orator for Chinar Grotto in Houston, Texas.

Roberto and his mother Maria are members of Bluebell Chapter No. 856 OES where he served as Worthy Patron along the side of his Worthy Matron Sharon Hill Adams in 2009 - 2010. In 2015, Roberto was elected Worthy Patron to serve alongside his mother Maria Elena Sanchez for the 2015-2016 year. In 2010, Roberto was appointed to the Arrangements - Labyrinth Committee by Mary Ruth White Grand Matron of The Grand Chapter of Texas OES. In 2013, Roberto affiliated with Klein Chapter No. 1141 the home chapter of the love of his life Suzette. Klein Chapter No. 1141 was chartered by the Wunsche family. The first Worthy Matron and Patron were Carl and MaryWunsche, Suzette's father and grandmother.

Roberto is a member of Arabia Shrine where he served as Ambassador for the San Jacinto Shrine Club (2010) and Ambassador for the York Rite (2015, 2016). He also served as Commander of the Flying Fez in 2010. He is also a Charter Member and Master Artisan of Tlaloc Teocalli No.1964 Order of Quetzalcoatl.

Roberto was the Charter Camaxtli in 2012 and was elected to serve a full term as Camaxtli in 2013; he currently serves as Tlacuilo (Secretary) for Tlaloc Teocalli No. 1964. In 2014, the Supreme Council of the Order of Quetzalcoatl elected Roberto into the Order of Knights Eagles and Tigers (OKET). Roberto was elected as the chartered presiding officer of the OKET's and held that position until 2016. In the 2014 midyear meeting of the South West

Q Association (SWQA) Roberto was elected as Titlauacan, the bottom of the association 4 year Grand Line, and in 2016-2017 he served as the Chief Camaxtli – the provincial Grand Master of the Order. The SWQA is composed of Teocalli's in Mexico, Texas, Louisiana and Oklahoma. At the Feast of the Fire in October 2014 Roberto was installed as Supreme Orator for the Supreme Council Order of Quetzalcoatl see of North America.

For his dedication to the Craft, Roberto has been invited to several honorary and invitational bodies such as: Thomas H. Ridout Priory No. 75 and Texas Priory No. 23 Knight York Cross of Honor (KYCH), The Societas Rosicruciana in Civitatibus Foederatis (SRICF), where he is currently the Celebrant for Stella Sola College in Texas. Gulf Coast York Rite College No. 106 where he is currently serving as Preceptor.

Lone Star Chapel No. 5 Commemorative Order of St. Thomas of Acon where he is serving as 1st working Knight. Sam Houston Council Allied Masonic Degrees No. 275 where he served as Sovereign Master in 2013 and Anson Jones Council of Knight Masons No. 47 where he served as Excellent Chief in 2016. In 2017, he was awarded the Knight Commander of Zerubbabel by the Grand Council of Knight Masons USA. Roberto was also the Charter Junior Warden and Secretary for Harry G. Cunningham Council No.475 AMD.

In 2010 He served as Sovereign Master of that Council. Harry G. Cunningham Council No.475 AMD honored Roberto with the rank of Knight Commander of the Red Branch of Eri, as well as Installed Sovereign Master, Installed Supreme Ruler and Installed Commander Noah. In 2014 Roberto was invited to be a charter member and Director of ceremonies of F'irinne Council of Knight Masons in Indiana, that Council honored him with a life membership for his efforts that same year. Great Chief Kenneth B. Fischer deputized Roberto as Great Chief to set that Council to labor. He also belongs to the Royal Order of Scotland, the Grand College of Rites, The North Carolina Court No. 73 Masonic Order of Athelstan, and several other bodies.

Roberto has given lectures on Masonry not just in Texas, but also all over the United States and across Latin America and Europe.

Roberto is considered by many an excellent Ritualist, his ability to do degree work in the many facets of Masonry put him head and shoulders above most. Roberto currently serves on the National Degree team for the Commemorative Order of St. Thomas of Acon, as well as the State degree team for the Knight Commander of the Court of Honor. He is on the degree team for the Gulf Coast York Rite College and he is also a member of the 4th, 5th, 9th, 10th, 13th, 15th, 16th, 17th, 18th, 23rd, 24th, 27th, 29th and 32nd degree teams for the Houston Scottish Rite. The Houston Scottish Rite honored Roberto with the award of Best Orator in the inception of the Warell Awards in 2010.

Over the years Roberto has received over 120 Masonic Degrees and has presided over 30 Masonic organizations.

Roberto is also a member of St. Alban’s Lodge No. 1455, Memorial Lodge No 1298, Tranquility Lodge No. 2000, American Lodge of Research (Full Member), Missouri Lodge of Research, Quator Coronati Premiere Research Lodge in the world, Founding Fellow of the Masonic Society, Guthrie College of the Consistory, The Grand College of Rites, The Masonic Order of the Bath, Ye Antiente Order of Corks, Order of the One Stone, Honorary member of the Order of DeMolay Italian Jurisdiction, Royal Order of Masonic Knights of the Scarlet Cord 4th Grade and Past President, The Masonic Order of Athelstan, High Twelve Club No. 736 and the Masonic Book Club. Roberto served on the Board of Directors for the Masonic Building Association of Holland Lodge No 1. He was also the Curator, Historian and Librarian for the Houston Masonic Library Museum as well as serving on the Board of Directors and Executive Committee.

Gray Lodge Honor Recipient, 2006 & 2011 (only recipient to receive it in both categories)

Masters, Wardens and Secretaries of the 30th District of the Grand Lodge of Texas

Royal Order of the Duck Canvas Back Flight №. 3, Valley of Houston

Royal Order of the Red Branch of Eri

Order of High Priesthood of the State of Texas (Life Member)

Knights Crusaders of the Cross of Louisiana (Life Member)

HONORARY AND OUT OF STATE MEMBERSHIP

Union Lodge №. 6 Grand Lodge of the District of Columbia F. A. A. M.

The Most Noble Sovereign Order of Knights Commander 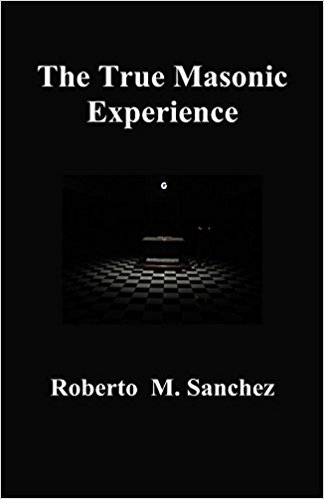 This book is written in the spirit of Traditional Masonry, Traditional being that of the beginning origins of Speculative Freemasonry. Several of our most honorable and ancient traditions are not being practiced; even in some cases they are illegal in some jurisdictions. In so many lodges today, the real intent of a True Masonic Experience is not being observed. We have gotten away from what our forefathers originally intended, we have become satisfied with the fellowship endured over a spaghetti dinner on paper plates, and that is not Freemasonry. Why is it that we as Freemasons have tried to turn masonry into something that it is not and have veered away from some of the foundations of the order? This book explores these venues and aid you to achieve the True Masonic Experience for you and the members of your Lodge