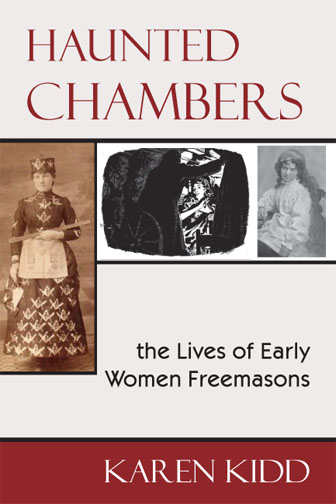 “ . . . and I have no doubt other ancient Lodges have their lady members just as
ancient buildings have their haunted chambers.”
W. Fred(erick) Vernon, 1892 edition of Ars Quatour Coronatorum

"These women aren't supposed to have existed.

"Haunted Chambers", for the first time ever, presents not only the most complete list of early women Freemasons but also as much detail about their lives as can still be found. Here are their stories, long suppressed, ignored and marginalized. They include medieval women stone cutters; so-called "adoptive" women Freemasons; an aristocrat; a countess; an early New Brunswick settler; a war hero; a writer of women's rights; an immigrant Irish girl; the famed sculptress of Abraham Lincoln's statue in the US Capitol Rotunda and many whose names are now lost.

Some will find this book a challenge. Some would rather it never had been written, let alone published. "Haunted Chambers" is highly recommended to anyone who wants the actual history of these early women Freemasons and aren't afraid to read it. "

"Lady Freemasons. - Brother Hart, the W.M. of the Melrose Lodge No. 1, in a brief, historical sketch of that ancient Lodge, printed along with the Bye-Laws, mentions that there was once upon a time a lady Freemason connected with the Lodge, in the following passage:-" After removing from Newstead, the meetings were held in. hired rooms for some years. It was about this period that the Lodge could boast of a lady member. The matron, a true daughter of mother Eve, somehow obtained more light upon the hidden mysteries than was deemed at all expedient; and, after due consideration of the case, it was resolved that she must be regularly initiated into Freemasonry. This, we believe, was actually done, with the best results,-the initiate ever remaining a true and faithful Sister among the Brethren." As this is merely a tradition, I have not mentioned it in my history of Melrose, preferring to abide by the written testimony of the preserved records, but I have been frequently assured, that although not mentioned in the minutes, that it is none the less a fact, the lady's name being given as " Tib Skin," which is the vernacular for Isabella Scoon. It is said that she was so impressed with the solemnity of her obligation that she ever afterwards distinguished herself in works of charity. This is another addition to the list of lady Freemasons, and I have no doubt other ancient Lodges have their lady members just as ancient buildings have their haunted chambers. - W. FRED. VERNON."