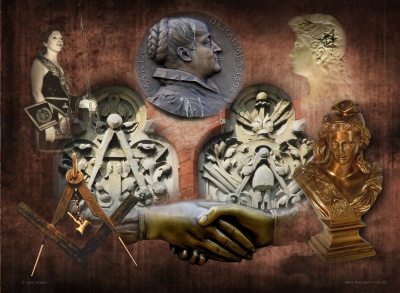 A History of Women’s Masonry

As all masculine Masons, especially in those Grand Lodges stemming from the United Grand Lodge of England (UGLE), know, women are not allowed to be Masons. In the Obligations of the rituals of some Grand Lodges (GLs), each Mason swears to “not be present at the making of a woman Mason.” Others specifically say that a masculine Mason may not sit in Lodge with a woman Mason. Still others do not even admit the possibility of female Masons’ existence so don’t require that sort of statement in their Obligations.

However, no matter what each of you has sworn over your years in Masonry, there are woman Masons around the world AND in the United States. The masculine GLs do not recognize our orders because, quite obviously, we admit women. However, things are slowly beginning to change. The UGLE has stated in its newsletter that there are two orders of female Masons in England that it believes to be regular in their operations except that they admit women.1 It is also willing to rent lodge rooms to those women’s orders of Masonry. In addition, there is open interaction (within the bounds of each person’s obligations) on shared lists and chat groups on the Internet. We are all learning more about each other as time goes on.

What some of you may not know is that there have been a few women initiated (and passed and raised) into masculine Lodges. Rumors abound about a large number of initiations held to bind the women to secrecy when they have observed or learned of Masonic rituals, but only two are well documented. Hon. Elizabeth St. Leger Aldworth, County Cork, 1710 (Conder, 1895)

The most prominent woman Mason to be initiated into masculine Masonry was the Honorable Elizabeth St. Leger. The Grand Lodge of British Columbia and Yukon has, with permission, reproduced the best account of her story as presented to Quatuor Coronati Lodge No. 2076, London, in 1895 by Bro. Edward Conder. Most of the following information comes from that source.

Her father, Viscount Doneraile, was a zealous Mason and often held occasional Lodges in his home. Conder believes that this Lodge meeting at Doneraile House was a private Lodge not on the rolls of the Grand Lodge of Ireland. This Lodge met to initiate a gentleman named Coppinger. Miss St. Leger was in a room adjoining the Lodge room where some construction was in progress. On awakening from a nap and hearing voices in the adjoining room, curiosity prompted her to remove a brick from the intervening wall where it was loosely placed and observe the initiation. When at length she attempted to leave the adjoining room, the Tyler heard her and held her “captive” while the Lodge debated the situation. Their decision was to obligate Miss St. Leger and admit her to the Lodge.

There is no firm determination of what Lodge2 Bro\ St. Leger was entered into or her date of initiation. Lodge numbers 44, 95, and 150 have been proposed. Lodge No. 44, however, was not formed until 1735 or 1736 making it too late for Bro\ St. Leger’s initiation as “a young girl” as the varied accounts claim. Her tombstone, however, does show Lodge No. 44. Likewise, Lodge No. 95 was not formed until 1738, also too late. And lastly, Lodge No. 150 was warranted in 1746 and was located in Dublin not in Munster. Conder’s theory that it was a private lodge is most likely. Whether it continued to operate after the Viscount’s death is unknown.

Legend says Bro\ St. Leger eventually rose to be Master of her Lodge but there is no evidence to substantiate that claim.

A picture of her in regalia was published in Robert Freke Gould’s “Concise History of Freemasonry.” The original is a portrait in the possession of her descendents (Lady Castletown, Upper Ossory). Many current Internet sites have replicas of the picture of Bro\ St. Leger (later Elizabeth Aldworth).

Bro\ St. Leger’s apron was in the possession of her descendents at the time of Bro\ Conder’s presentation to Quatuor Coronati in 1895.

The evidence in the case of Bro\ St. Leger points to the truth of this legend of a woman freemason. Helene, Countess Hadik Barkoczy, 1875 (MSA, 1933)

Countess Barkoczy was the last of her family and was given the place of a surviving son by the Hungarian courts. Her inheritance included her father’s Masonic library which she read and studied. In 1875 Lodge Egyenloseg, holding warrant from the Grand Orient of Hungary, admitted the Countess to the order. As a result, the Grand Orient disciplined several members of the Lodge. The Deputy Master was expelled from Masonry and other officers of the lodge were suspended for three, six or twelve months (Builder, 1921). The Countess was required to return her certificate of invalid initiation. This is the best-documented instance of a woman being admitted to masculine Masonry.

The earliest form of women’s Masonic Lodges in France used the Rite of Adoption, a rite somewhat similar to that of the Order of the Eastern Star in the United States. The first of these Lodges was formed in 1744. They were open to the female relatives of masculine Masons and were sponsored by masculine Lodges (WGLB, 2004). In addition, the Master was a masculine Mason. These Lodges were formed under the auspices of the Grand Orient de France. During the French Revolution these Lodges went dormant; however, at the end of the 19th century, there were 150 lodges having 5000 members (Segall, 1994).

On January 14, 1882, Les Libre-Penseurs Lodge in France (La Grande Loge Symbolique de France) initiated Mlle. Marie Desraimes into Freemasonry (Outline, 1993). There had been discussion of initiating women into this new grand lodge for several years, but no Master had proceeded with the plans. When R\W\Bro\ Georges Martin became Master of this Lodge, he proceeded immediately with the initiation of Mlle. Desraimes. The GL promptly suspended the Lodge, which split over the initiation. Bro\ Desraimes withdrew from the Lodge rather than cause the expulsion of her Brethren.

In May 1891 Lodge Le Jerusalem Ecossiase of La Grande Loge Symbolique Ecossaise (with R\W\Bro\ Martin in the East) discussed the creation of independent mixed lodges. When no action was taken, Brn\ Martin and Desraimes determined to create an independent body. On 1 June 1892, Bro\Desraimes initiated 16 women into Masonry as Entered Apprentices. On 24 March 1893 these women were passed to Fellowcraft and R\W\Bro\ Georges Martin was affiliated with the Lodge making it truly mixed. On 4 April that same year, the International Order of Co-Freemasonry, Le Droit Humain, was chartered. A lasting form of Mixed Masonry had arrived in France and would spread around the world from there.

In 1901 Adoptive Lodges were reactivated in France under the auspices of the Grande Loge de France (Segall, 1994). Soon these lodges operated using the Adoptive Masonry rituals but eliminating the male Masters in the chair of King Solomon.

In 1945 the Union Maçonnique Feminine de France was formed with the aid of the Grande Loge de France to unite all the women’s lodges. This Grand Lodge was independent and its membership was and is exclusively female. In 1952 the name was changed to the Feminine Grand Lodge of France (GLFF).

In 1959 most of the GLFF lodges abandoned the Adoptive Lodge ritual and began using the Ancient and Accepted Scottish Rite. The French Rite and French Traditional Rite were introduced in 1973. However, in 1994 there was one remaining Lodge in the Feminine Grand Lodge of France, Cosmos, No. 76, which still used the Rite of Adoption (Segall, 1994).

In 1981 the Women’s Grand Lodge of Belgium was formed. This GL plays a role in the orders for women in the United States today (see below).

On 26 September 1902 Annie Besant, who had been initiated, passed and raised into the International Order of Co-Freemasonry, Le Droit Humain, in France, spearheaded formation of Lodge Human Duty, No. 6 of LDH in London (Outline, 1993). She and others believed that English lodges should follow the UGLE requirement of belief in a Supreme Being even though the lodges would not be recognized by the UGLE as regular. On that basis she negotiated the “Annie Besant Concord” with the Supreme Council of LDH allowing English-speaking lodges to add that admission requirement for all candidates. That requirement was subsequently passed along to all English-speaking lodges of LDH around the world (Grand Lodge, 2004).

In 1908 the first English all-female Masonic order was formed: the Honourable Fraternity of Antient Masonry, which became the Order of Women Freemasons in 1958. This foundation was followed by the creation of the Honourable Fraternity of Ancient Freemasons in 1914. These two orders have over 60,000 members in Great Britain. Although they are not recognized as “regular” Freemasonry, the UGLE does acknowledge their existence and even rents lodge rooms to these women.1

Two additional mixed Masonic orders were formed in England: Order of Ancient, Free and Accepted Masons for Men and Women (1925) and the Grand Lodge of Freemasonry for Men and Women, 18 February 2001.

Mixed and Feminine Orders in the United States

French Officers in the Continental Army formed one Lodge of Adoption in the United States in 1778. Vinnie Ream Hozie, initiated into that Lodge, has been called the first woman initiated on American soil (WGLB, 2004).

Scarce records indicate the possibility that there was one feminine Lodge in the United States in the 1790’s in Boston. This Lodge was referenced in correspondence from Hannah Mather Crocker who was supposedly the Mistress of the Lodge, St. Ann’s (WGLB, 2004).

The first Co-Masonic Lodge was founded in Charleroi, PA, 25 October 1903 as Alpha, No. 301 of LDH. That lodge was French-speaking. Other non-Anglo lodges were formed over the next few years (Outline, 1993).

In 1908, Annie Besant formed the first English-speaking Lodge for LDH in the United States bringing the Dharma Ritual with her.

Other early Lodges in the United States were opened under the auspices of the Grand Lodge Symbolic of Memphis-Misraim and the George Washington Union (WGLB, 2004).

Current Orders in the United States

Today there are a number of Masonic Orders admitting women in the United States. One is completely female: the Women’s Grand Lodge of Belgium with 4 lodges (Brodsky, 2005).

One order, the Ancient and Primitive Rite of Memphis-Misraim, allows each Lodge to choose if it will be all male, all female, or mixed. This order has 1 all-female lodge in the United States, 1 all-male lodge and 4 mixed lodges (Wintermute, 2005).

Other Orders of Masonry have small presences in the United States (Ceccanti, 2005):

The following is a copy of the inscription on her tombstone in the churchyard of St. Finbar Cathedral (Church of Ireland).

In Pious Memory of
The Honourable
Elizabeth Aldworth,
Wife of
Richard Aldworth
Of Newmarket, County Cork
Daughter of
Arthur, First Viscount Doneraile.,
Her remains lie close to this spot.
Born 1695
Died 1775.
Initiated into Freemasonry in
Lodge No. 44 at
Doneraile Court
In this County.
A.D. 17123