Karl and St. Germain at Louisenlund 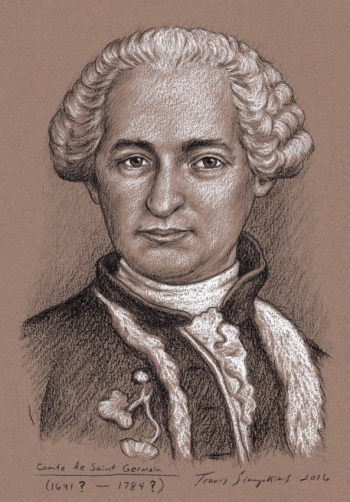 The head of the Asiatic Brethren in the 1780s and 1790s was the Landgrave Carl von Hessen-Kassel, one of the most fascinating and influential figures at the time in the world of Masonry, Rosicrucianism and hermetic studies. He not only belonged to innumerable orders and rites, but he was a practicing alchemist and was a friend of the mysterious French alchemist, the Comte de St. Germain, whom he harbored during the last years of St. Germain’s life on his estate Louisenlund in what is now Schleswig-Holstein, which he turned into a great center of Masonic and esoteric activity. The park at Louisenlund (about an hour’s drive northwest of Kiel) was laid out in the form of an initiatic journey that involved the candidate passing through a dense wood finding his way through a labyrinth and encountering various alchemical and allegorical images along the way.

In the park was an alchemist’s tower with a laboratory and a room where Masonic rituals were conducted. There was also a pond with a secret grotto concealed behind a waterfall, in which the most solemn rituals were held. Over the years, unfortunately, most of these symbolic features have disappeared. All that remains of the alchemist’s tower, for example, is this Egyptian stone doorway which was moved to a different position, and cemented into the wall of a stable building where it stands completely out of context. Today this property belongs to a private school.

According to the official site, Louisenlund was built between 1772 and 1776 by Hermann von Motz. Apparently, it was a birthday gift from Karl to his wife Louise - that is, Louise Oldenburg, Princess of Denmark (1750-1831), the daughter of Frederik V Oldenburg (1723-1766), King of Denmark and Louisa Hanover (1724-51), Princess of Great Britain and Ireland. That would make them first-cousins (”blue bloods” to the core); Karl was the son of Friedrich II Landgrave von Hessen-Kassel (1720-1785) and Mary Hanover, Princess of Great Britain (1723-1772).

Perhaps the mansion itself was a gift, but it’s apparent that the forest surroundings served as Karl’s own occult-Masonic playground. Alessandro Tosi, “Stages of Knowledge, Settings for Brotherhood,” in Performance and Appropriation: Profane Rituals in Gardens and Landscapes, says “the park of Louisenlund comprised an initiation route that passed by an artificial lake and a cavern, before ending at a Gothic-cum-Masonic tower erected between 1779 and 1784″ (p. 60).

The remnants of Karl’s obsession - though fleeting - are still apparent here and there. Most obvious is the Masonic pillar (apparently dedicated to his wife), and an obelisk. According to the tour guides for the park, the gardens of Louisenlund is in a traditional baroque style. The main avenue begins in the Northeast and leads to the forest. In front of Mansion there is an armillary sphere, representing the cosmos - a common device utilized by astrologers and alchemists.

The guides recommend visitors stroll through the park in the manner intended by Karl: on the “path to enlightenment.” The tour should start from the Nordic House [Nordische Haus] in front of the lake, which, they say, resembles an eye, and hence was dubbed the “magic eye” [magische Auge]. This magic eye reflects the sky (Hermetic symbolism: as above, so below) and the lake overflows into a waterfall which at one point was regulated by a ram (bringer of spring), suggesting more Egyptian influence. The “magic eye” of the lake, they further speculate, might also allude to Horus.

Karl was an incorrigible mystic, a Mason, an Illuminatus, an alchemist, a spiritualist and practicioner of all manner of “occult sciences.” That he chose this place to conduct his activities is no wonder. What probably attracted him in the first place, is what is known today as Louisenlund grove: a collection of standing stones on Bornholm island. Karl, no doubt, wanted to harness the same energies as the ancient mystics who had, long ago, in a forgotten past, practised a tradition he longed for, and sought all his life to reintegrate.