En:Supreme Architect of The Universe 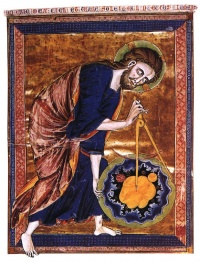 Supreme Architect of the Universe

Christian theologians such as Thomas Aquinas hold that there is a Grand Architect of the Universe, the First Cause, and that this is God. Commentators on Aquinas such as Stephen A Richards have pointed out that the assertion that the Grand Architect of the Universe is the Christian god "is not evident on the basis of 'natural theology' alone but requires an additional 'leap of faith' based on the revelation of the Bible".

Masonic historians such as William Bissey, Gary Leazer (quoting Coil's Masonic Encyclopaedia), and S. Brent Morris, assert that "the Masonic abbreviation G.A.O.T.U., meaning the Great Architect of the Universe, continues a long tradition of using an allegorical name for the Deity". They trace how the name and the abbreviation entered Masonic tradition from the Book of Constitutions written in 1723 by Reverend James Anderson. They also note that Anderson, a Calvinist minister, probably took the term from Calvin's usage.

Christopher Haffner's own explanation of how the Masonic concept of a Great Architect of the Universe, as a placeholder for the Supreme Being of one's choice, is given in Workman Unashamed:

Now imagine me standing in lodge with my head bowed in prayer between Brother Mohammed Bokhary and Brother Arjun Melwani. To neither of them is the Great Architect of the Universe perceived as the Holy Trinity. To Brother Bokhary He has been revealed as Allah; to Brother Melwani He is probably perceived as Vishnu. Since I believe that there is only one God, I am confronted with three possibilities:

It is without hesitation that I accept the third possibility..