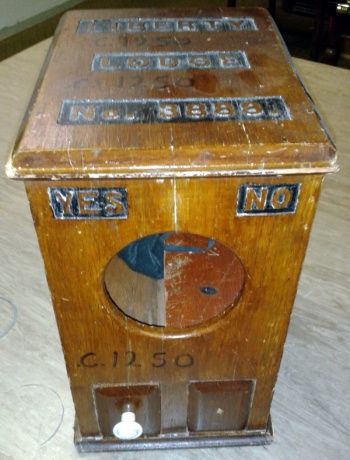 Source: The article below is taken from the book "A Quick Guide to Freemasonry" by Dr David Harrison

The use of balloting using black and white balls in lodges dates way back to the eighteenth century, the method being a democratic, though anonymous means of electing new candidates and joining members, and to settle disputes within the lodge—a secret ballot in effect. So when a candidate is proposed and balloted for, a brother feels that he is not the right person to be involved in Freemasonry, they can choose a black ball, whereas if they favour the candidate, they would choose a white ball.

For example, in the Lodge of Probity, a lodge founded in 1738 which still meets in Halifax, Yorkshire, it was recorded in the minutes on the 10th of August, 1763, that a certain Robert Kelly was rejected as a new member with a ballot of ‘five yes, and seven no’.

It was thus agreed that this particular brother could visit and the dispute should never be brought up in the lodge again.[ii] In the York ‘Union’ Lodge, a lodge founded in 1777, the use of black and white balls for balloting was evident, as on 19th January, 1778, the lodge blackballed a new candidate and no reason was given. He obviously just wasn’t the right type of person for the lodge!

Other societies that became increasingly popular in the nineteenth century, such as the Oddfellows, also used a similar system of balloting, and there was even an instance of a ‘Discussion Class’ held at the Mechanics’ Institute in Warrington, Lancashire, using a similar method of balloting, proposing new members who had to be accepted by a majority; the class tried to become exclusive and twice rejected a would-be ‘debater’ on grounds of class, leading to the rules being changed.

The use of black and white balls also reflects the use of white and black within the lodge; the chequered floor of the lodge room and the use of dark clothing and white gloves, giving the working of the lodge an overall theme as well as a striking visual effect, reflecting the light and darkness of human nature; the black choice a negative one, the white choice being positive.

In rule 190 of the 1919 edition of the UGLE Constitutions, it states that ‘No person can be made a Mason in, or admitted a member of, a Lodge, if, on ballot, three black balls appear against him; but the by-laws of a Lodge may enact that one or two black balls shall exclude a candidate’. Thus, an effective and indeed, a flexible way of balloting has been used for centuries within lodges, to guarantee that ‘no Lodge should introduce into Masonry a person whom the Brethren consider unfit to be a member of their own Lodge.’ Today, some lodges use a ‘yes’ or ‘nay’ box instead of black and white balls for voting.