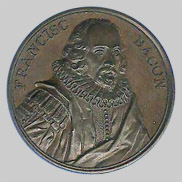 It has been said that Francis Bacon’s Novum Organum and later work,The New Atlantis "exerted a considerable and beneficial influence on the manners of his age".1 Simply put, he proposed that science is inductive. In his utopian allegory The New Atlantis, Bacon wrote of a 'House of Solomon': a college of scientific observation and research.

His association with or influence on Freemasonry though, is doubtful. If he was initiated or active in any operative or speculative Masonic lodge, no record is known. The supposed link was made by Christoph Nicolai [Nicholai] who wrote that Lord Bacon had taken hints from the writings of John Andrea 2 , the founder of Rosicrucianism and his English discipline, Fludd 3 and that his ideas heavily influenced Elias Ashmole.4

Bacon’s mentorship of modern Freemasonry has much the same historical veracity as his alleged authorship of the works commonly ascribed to Shakespeare. But Christoph Nicolai claims that, with Bacon’s inspiration, Ashmole and others used Masons' Hall, London to conceal their secret political efforts to restore the exiled house of Stuart and to build an allegorical ’solomon’s House'.5 The New Atlantis did exert a strong influence on the formation of the Society of Astrologers with Elias Ashmole in 1646 and they did meet at Masons' Hall. Many members of this society also became Freemasons. But if they had any influence at all on the ritual or doctrines of Freemasonry, it is not apparent, from what few records remain.

To suggest that Ashmole introduced Solomon’s legend into the masonic ritual is to ignore the Sloane Manuscript (No. 3848, British Museum) or the rituals of the Copagnons de la Tour. They clearly show that operative masons were familiar with the legend. Ashmole’s reputation with his contemporaries was that of an antiquary and historian, not a ritualist. And unfortunately he never found time to write a history of the Craft.

Albert Mackey refers to Nicolai’s theory on the Bacon inspired origin of the Grand Lodge of England as "peculiar." 6

2. John Andrea (b. 1586/08/17 - d. 1654/06/27). Fama Fraternitatis. [Arnold in his Ketzergeschichte claims Andrea as the founder yet others claim he was merely an annalist of the Order or that the whole was a mythical invention created as a vehicle for Andre’s ideas of reform.].

3. Robert Fludd (b. 1574, d. 1637/09/09), author of Atque technica historia. and Apologia Compendiaria Fraternitatem de Rosea Croce [1616]. Although opposed to Rationalism, his writings are erroneously claimed by Thomas de Quincey as the source of the symbolism in Freemasonry.