It was a repeated up and down; but after the end of the Second World War 1945 an increasing success.

Only 25 years after the founding of the Grand Lodge of London and Winchester, the Lodge "Aux Trois Canons” was consecrated in Vienna by a Lodge from Breslau in mid September 1742. It was, however, closed only six months later by order of “Empress” Maria Theresa I. Her husband Franz Stephan von Lothringen, (later the German Emperor Franz I.), was unable to prevent the closing even though he himself was a member having been initiated out of diplomatic reasons in 1731 in the Netherlands in a British Deputation Lodge. He was never to be realised as a member of an Austrian Lodge (only his son Joseph II mentioned it in a letter to a German lodge).

Although the papal excommunication in Austria had no effect, Maria Theresa particularly feared Masonry as a vehicle for foreign influence. Despite this in 1754 a recognised Lodge was formed by accredited diplomats in Vienna, the Hanoverian Deputation Lodge "Aux Trois Cœrs" (The three hearts) with several of the original Lodge "Aux Trois Canons" numbered within it’s ranks. In the early 1760s the military Lodge “Die Freimütigen" was formed presumably by Austrian officers, who had returned from French captivity in Magdeburg. In addition in 1770 there was the famous Lodge "The Three Eagles", Lodge "To Hope" as well as the well known Lodge "To Holy Joseph" all consecrated in Vienna.

Away from the capital and through the barely manageable Habsburg Empire there were other Lodges as early as 1730 in the then Austrian Netherlands, Bohemia, Transylvania, Galicia, Hungary, Trieste, Croatia, Bratislava and in Lombardy. On today’s Austrian soil the Berlin based Grand Lodges formed the First Provincial Lodge of Austria in 1777 in Vienna followed by several lodges in Innsbruck, Graz, Linz, Klagenfurt and Salzburg one year later.

Famous well beyond the country's borders was the Viennese lodge "To True Harmony", which existed from 1781 to 1785; developing under the Chair of Worshipful Master Ignaz von Born an excellent scientific academy. On April 24, 1784 under Emperor Joseph II the first Grand National Lodge of Austria was constituted pursuant to his order, completely independent to that in Germany.

Our former brothers numbered amongst them representatives of secular and spiritual nobility, e.g. Joseph von Sonnenfels, Aloys Blumauer, Joseph von Retzer and the composers Wolfgang Amadeus Mozart and Joseph Haydn as well as many other artists and scientists, the very roots and noble spirits of their time. Representatives of the bourgeoisie and aristocracy met under a Masonic banner on an equal footing, which was absolutely unthinkable in the former secular world.

Sadly the Craft in that time also attracted charlatans, alchemists and mystics to their ranks. This fact alone caused Josef II to reduce the number of consecrated Lodges on the 11 December 1785. Finally in 1793 Emperor Franz II forced the last two Viennese lodges to extinguish their lights, not least due to strengthened relations with the Vatican and from fear of the intrusion French-inspired revolutionaries.

In fact during the 19th century it was the national rather than the social revolution which stood in the foreground. Politicians like Lajos Kossuth and Giuseppe Garibaldi pitched themselves with the Habsburg independence movements founded in Hungary and Italy supported from a Masonic background. In Vienna only a single Masonic work took place during the course of the bourgeois revolution in October 1848 with the light being extinguished immediately during it’s suppression.

It was only through the momentous defeat of the Austrian by the Prussian army at Königgrätz 1866 that the power of the central government in Vienna was so weakened that they had to agree to the "balance" with Hungary one year after. The subsequent dual monarchy of Austria-Hungary shared only interests in foreign policy, the army and the finances, for the remaining legislation the two halves of the empire were completely autonomous with even the transportation of goods within the Empire attracting a tax. The liberal Hungarian Associations Act enabled the establishment of lodges and formed two independent Grand Lodges. Soon these were united under the Symbolic Grand Lodge of Hungary.

This period was one of general upheaval for Austria and so the start of the so-called "Border Lodges Period" (in German language: “Grenzlogen”). In 1869 the non-political association "Humanitas" was founded in Vienna, followed by the establishment of 18 Hungarian lodges in 1871, so the first Austrian “Border Lodge”, Lodge "Humanitas" arose. Three years later followed the Lodge “Zukunft” (“Future”), then the "Socrates” and "Pioneer" just to name a few. In Vienna all of these lodges met as "non-political or humanitarian organizations". To complete Ritual work, the Brethren travelled several times a year across the nearby border to Pressburg (now Bratislava in Slowakia), Ödenburg (now Sopron in Hungary) and Neudörfl (now in Austria).

These French influenced Lodges were highly charitable to a large extent focusing also on social reform and activity. Here, representatives of the liberal bourgeoisie, which did not look to Prussia but to Paris met politically. Their sociopolitical aim was to curb clericalism and its influence on the education and marriage legislation. The association "Free School" is also a Masonic foundation as is the "Ethical Community" which schooled the enlightened via lectures and seminars. The Brethren were there for the birth of the “Vienna Rescue Services” as well as various and many social pedagogical and sociological societies. In addition to lawyers, doctors and business people numerous scientists, musicians and actors were members of the Craft going so far as to publish the magazine “Der Zirkel” ("The Circle") between 1871 and 1917. Occasionally there were also German national members, but the vast majority came from an assimilated Jewish background who were a solid anchor in the Lodge until 1938. It had only been in Constitution of 1876 that Jews received their full rights as citizens, that did not mean that the Christian majority society entertained them immediately within their club and corporate life. Indeed, until the First World War, there was a flood of anti Masonic writings coupled with a string anti-Semitic undertone in Austrian and their hereditary lands.

But the Hapsburg Empire had to collapse after World War I to make the establishment of the Grand Lodge of Vienna possible in 1918. From 1919 up to 1938 Grand Master Richard Schlesinger was ruling. He guaranteed a pacifistic, humanistic and internationalist and, in contrast to the German Grand Lodges, pro-European spirit. Important for the Brethren were the ideas of our Nobel Peace Prize recipient Brother Alfred Hermann Fried as well as those of the economist and Human Rights activist Brother Rudolf Goldscheid, even though he was a member of German non accepted lodge in Vienna. It is therefore not surprising that the Grand Lodge of Vienna oriented themselves in all things Masonic not to Berlin, nor even to London, but to Paris. At their peak there were 2,000 members in 24 lodges working together with community institutions such as the "Austrian Peace Society", the "League for Human Rights", and the “Ethical Community". From 1919 to 1938, the “Wiener Freimaurerzeitung” ("Viennese Freemasons Newspaper") was even sold to the public or could be easily found in some coffee houses.

Also there was a marked closeness to the political ideals of Social Democracy including well known trade unionists Brother Ferdinand Hanusch and Vienna’s city Councillor Brother Julius Tandler under the Craft. There are other similarities to iconography such as the hammer, the sun and light symbolism or the two combined hands in a handshake, as is the slogan of the "New Man", which dates back to a book by Max Adler. The European political heritage of Brother Alfred Hermann Fried was continued by Brother Richard Coudenhove-Kalergi, his Pan-European Union was supported until 1938 by the Grand Lodge of Vienna.

In 1930 it even received recognition by the United Grand Lodge of England, but previously the German Grand Lodges had withdrawn their recognition because they disliked the Jewish and Francophile influences, the pacifism of the Austrian lodges, and because the Viennese had significantly supported the establishment of the Scottish Rite in Berlin as well as the Symbolic Grand Lodge of Germany in Hamburg, who were also aligned with a more pro-European feeling.

Under pressure from the autocratic rule by the newly founded “Austrian Cooperate State”, a kind of semi fascistic non-democratic regime, following 1933 the Lodges lost many of their members until by mid-1937 their exact number was only 1,167, yet they still admitted a few new ones. Police spies watched closely the Craft, public officials were forced to resign. In contrary to political parties and its front organsiations the Grand Lodge of Vienna was not forbidden or hunted. Bending the knee before the Nazi state however was never in discussion in Vienna.

As part of the "Anschluss" in March 1938 when Hitler united Austria with Nazi-Germany those remaining Lodges were finally extinguished with their meeting house at Dorotheergasse 12 was partially plundered. Until August 1939, du to its proximity to the National Library the house acted as a transit point for looted books from Jewish owners. The plan from some Nazi supporters to set up an anti-Masonic Museum here would never be realized. All the archives were stolen by the Nazis and later on by the Red Army, the 1945 refounded Austrian Grand Lodge is still waiting to get them restituted from Russian archives (2015).

More than 100 of the Austrian Brethren were murdered in the Nazi concentration camps, and more than 600 took refuge in States who granted asylum, like France, England, America, Australia, Brazil and Shanghai. Here it should be mentioned that after the beginning of the War the Grandlodge of England in no way supported those Brethren who had escaped the Nazi threat with Lodges remaining closed to them until after the end of the war. The Situation in Australia was similar to that.

At the first meeting after the end of the World War II in Vienna in 1945 exactly 48 Brethren came together to breath new life into the Craft. This figure shows how fundamental was the break in tradition. The main objective of the meeting was consolidation, with support from US-General Mark Clark who was Supreme Commander of American forces in Austria and a member of the Scottish Rite 32nd Degree. It was the third time in history that Austrian brethren had to rebuild their “Grossloge von Österreich” (“Grand Lodge of Austria”). The Austrian Grand Master was the surgeon Karl Doppler, who sadly died in June 1947. His longtime successor as GM was the Carinthian Catholic Bernhard Scheichelbauer, who served as head of the Federal Press Service of the Federal Chancellery in civilian life. He introduced many crucial decisions for the future, with the Catholic Church he arranged a kind of “Armistice”.

At an international level the Grand Lodge of Austria broke all relations with the French Grand Lodges in 1952 later receiving recognition from the UGLE. Some Austrian Brethren split off and founded an "Independent Grand Lodge", which soon changed its name in “Großorient von Österreich” (“Grand Orient of Austria”). In 1955, when the II. Republic of Austria on 22 April was established, the – as it was named now - “Grossloge der Alten, Freien und Angenommenen Maurer von Österreich” (Grand Lodge of Austria of Ancient, Free and Accepted Freemasons) had, at that time, some 500 members. Since then there has been continuous development. In 2015 there are almost 80 Lodges in Austria with a total of 3,400 members. They are based in all regional aereas, some even in smaller towns. Besides the regular Grandlodge there exist also five smaller mixed Grand Lodges: namely the French oriented “Droit Humain” with more than 400 and the mentioned “Großorient” with nearly 200 sisters and brothers. 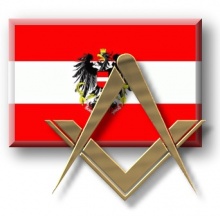