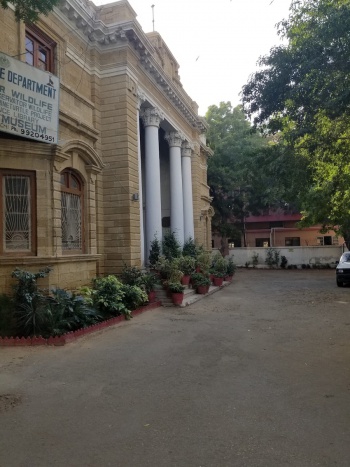 Former Freemasons Hall in Karachi, most populous city in Pakistan. The building was confiscated 1973 by the government and then rededicated.
All the Photos shot 2017 by Hafiz Khandwala.

Inside a staircase still with masonic signs and on the wall at the upper end a historic board. 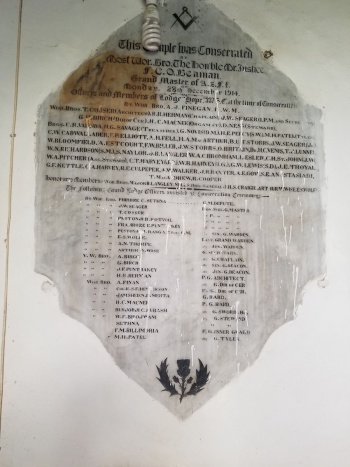 Freemasonry was introduced to Pakistan during the era of the British empire. Masonic organisations continued in the country until they were completely ousted in 1972 by Zulfiqar Ali Bhutto and again by Zia-ul-Haq in 1983.

The Sindh Wildlife Conservation building in Saddar, Karachi, served as a Masonic hall until it was taken over by the government. The Masonic Temple in Lahore, built in 1860, has been renamed to Mason Hall and is today used as a multi-purpose government building by the Government of Punjab.

We thank Br. Rick and Br. Hafiz for the permission to transfer the text and the photos to the Freimaurer-Wiki

In response to enquiries about joining the Fraternity from within Pakistan, something that is not possible under the current regime, I have conducted some research, which I hope will explain to those Pakistanis interested in joining, why it is not going to be possible in our lifetimes.

Pakistan was established as an Independent Islamic Republic after a successful fight against British rule followed by lengthy Political and Military struggles with India; in particular the Coup D’état in 1958, and the War with India in 1965.

Pakistan is currently the second most populous Islamic Country (97% of the Population), mainly populated by Sunni Muslims.

In Karachi, there exists a Freemason Hall, near Fawara Chowk (Fountain Square). The cornerstone of this building was laid in 1843. This was The Lodge of Hope and Perseverance No. 782 (Sometimes simply referred to as Hope Lodge) and operated under the Scottish Constitution, and was established on 7 Sep 1842 under a warrant issued by the Governor of Sindh, Bro Charles Napier, who was also made an honorary member of the Lodge.

Perhaps the most well known brother to be initiated there was Bro Rudyard Kipling. Born in 1865, He was initiated in about 1885, which would have made him under the age of 21 years of age. This would be permissible if he was the Son of a Freemason (known as a Lewis), but there are no records of his Father being in the Craft.

Further research reveals that he was initiated "under age" under special dispensation. He was subsequently raised to the 3rd degree, and was later advanced into Mark and The Royal Ark Mariners.

Freemasonry was thriving in the region during Victorian Times. It was the home to 17 Craft Lodges, 41 Chapters, under both English and Scottish Constitutions. There was also one Lodge meeting under the Irish Constitution. Another 22 Lodges operated throughout what is now known as Pakistan with a total membership of about 700.

As sadly continues today, disinformation and suspicion spread via media outlets and rumor control. The protagonists of this urged the Government to act based on very overt Anti Semitism, linking Freemasonry directly to Judaism, completely ignoring the fact that the predominant faiths in the Lodges were Christian, Muslim, and Sikh.

The first steps towards banning Freemasonry in general came in 1965, when the Government of Pakistan, under Pres Ayub Khan, banned military servicemen from becoming members of the Freemason fraternity, the Rotary Club or the Lions’ Club. In 1969, this ban was expanded by Pres Yahya Khan to cover all public servants, generalising the ban as a restriction from becoming a member of any organisation or fraternity whose aims and objectives were not publicly known.

All subsequent Presidents have supported the former ban, and in consequence there have been several amendments to the law relating to Freemasonry enacted by Parliament, with the intention of further restricting the rights of Freemasons to meet.

Freemasonry existed in Pakistan from 1843 right up until 19th July 1973, when Pakistani Police and Army, under the command of the local Magistrate, entered the Freemasons Hall, and seized control of the Building. They confiscated all documents and other material in the building. Today it remains under Government control. The Planning Commission of The Government of Pakistan has since converted the Building into Office Blocks.

On 16th June 1983, all allegedly "illegal" activities of Freemasons were banned under the Martial Law Regulation 56. However those Freemasons still living there continued to meet in secret. On 29th December 1985, the law was again changed, and the ban was extended to any and all Freemason activities in the country.

As the banning of Freemasonry in Pakistan was in recent History, there remains a tentative link via the United Grand Lodge of England, albeit there are no more Lodges meeting there. As the original Masonic Buildings still have the square and compasses displayed, this may lead many Pakistanis to believe they are still operating. Not so, and certainly not in such a manner that their meetings would be made public (Don’t bother asking me if they still meet, where they might meet or when, I do not know, and to be honest, even if I did, I wouldn’t tell you!).

The question then arises; Can I travel to another Country to become a Freemason? I wouldn’t advise this, as it is a lot of hassle “just” to become a Freemason, but mainly because most Lodges require the person asking to join to be a legal, and permanent resident within the Country of the Lodge to which they apply. India is the nearest Country that has a large and thriving population of Freemasons, able to meet legally, however crossing the border 3 or 4 times a month (The usual requirement) for a 2 or 3 hour meeting, rehearsal or Lodge of Instruction would get tiresome to the most dedicated Man.

On posting this article, Brother Willie Miller was kind enough to give additional information that Kurrachee Lodge No 337, appears on the Roll of the Grand Lodge of Scotland, re-opened as a Lodge of Research in Rosyth, Kingdom of Fife, Scotland. This Lodge was formerly in Pakistan.