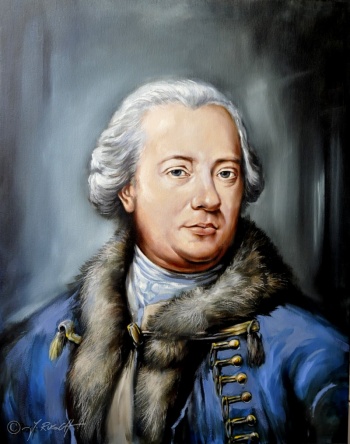 Oil on Canvas, painted by by Bro Jens Rusch

was the co-founder, then first Master of Germany's oldest lodge in Hamburg in 1737, the „Societé des acceptés maçons libres de la ville d' Hambourg“ [Society of accepted freemasons of the city of Hamburg]. On August 10th 1738 crown prince Frederick of Prussia (who became king two years later as Frederick II, the Great) was initiated in Braunschweig by Baron von Oberg and a deputation of his lodge. Following the crown prince's invitation Georg Wilhelm Ludwig von Oberg and the writer von Bielfeld who had served as secretary in Braunschweig, visited Rheinsberg Palace in 1737 to establish a new lodge. Von Oberg was the first Master of the „Kronprinzenloge“ [crown prince's lodge], succeeded by Frederick himself as Worshipful Master of the lodge after von Oberg's departure.

From Hamburg to Prussia

Baron von Oberg was elected as first Master of the lodge, in office after December 23rd 1737, the day Sarry leaded an elevation to the master mason degree for the first time. Von Oberg became known by initiating prussian crown prince Frederick in Braunschweig „on August 14th 1737, after midnight“ together with two brothers of his lodge, preceeded by a meeting between Frederick and von Oberg in Braunschweig.

But von Oberg got into trouble with some of his brothers because of the travel expenses from Hamburg to Braunschweig and back (value of the claim: 438 „Mark Courant“). Hereon von Oberg left the lodge resentfully „forever“. After that Baron von Oberg ministered to the prussian crown prince. He established the first lodge in Rheinsberg for the prince and became Master of the lodge. Thus, exercised freemasonry found its way from Hamburg to Prussia.