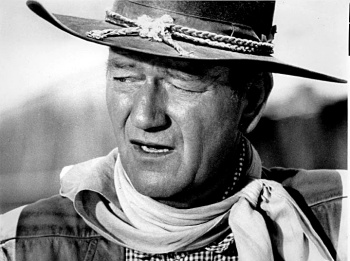 He was a Freemason, a Master Mason in Marion McDaniel Lodge No. 56 F&AM, in Tucson, Arizona. He became a 32nd Degree Scottish Rite Mason and later joined the Al Malaikah Shrine Temple in Los Angeles. He became a member of the York Rite

Born Marion Morrison, "The Duke" appeared or starred in over 200 films in his fifty-year career, winning an Oscar for "True Grit," in 1969. Remembered for his definition of the American individualist of a mythical wild west, he came to represent America to several generations of movie-goers.

A Member of Glendale DeMolay Chapter during his high school days, Duke was also a freemason, like his father before him, receiving his Craft degrees in July 1970 in Marion McDaniel Lodge No. 56, Tucson, Arizona. A Senior DeMolay, he was also awarded the DeMolay Legion of Honor in 1970. In December of that year, he joined the York Rite Bodies in California and became a Shriner in Al Malaikah Shrine Temple.