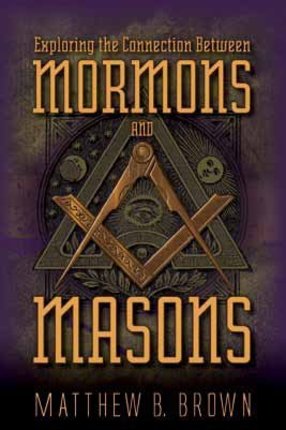 "Matthew Brown is the author of a new book, Exploring the Connection Between Mormons and Masons, that explains Smith's involvement in Freemasonry, a long-lived fraternal order that teaches moral ideals to its members and promotes charitable causes. Some of Mormons and Masons is based on Brown's prior studies and writings, but he didn't just rely on what he already knew to write the book. Brown said that he spent about two-and-a-half years doing research and made a broad-based investigation of Freemasonry, including its rituals, history, philosophy and symbolism. He also dug deeply into 19th-century LDS history, going so far as to create a 75-page timeline of Joseph Smith's revelations and his knowledge of ritual matters. He studied LDS temples, Old Testament and New Testament texts, the first 1,000 years of Christianity after Jesus Christ, and modern Eastern Orthodox Christian initiation rites.

“In all, he said, his research involved visits to libraries and universities in Utah, Minnesota and Florida.

“Brown said he hopes that his LDS readers come away from Mormons and Masons with a renewed appreciation for Smith, and a renewed conviction of their religious beliefs.” — Cody Clark, The Daily Herald

Why did Joseph Smith become a Freemason? Who introduced Freemasonry into Nauvoo, Illinois, in the early 1840s? Do the Masons really descend from the stonemasons who built King Solomon’s temple? Is there an ancient relationship between the Masonic lodge rites and the Mormon temple ordinances?

The subject of Joseph Smith and Freemasonry sparks a wide range of responses among Latter-day Saints, from curiosity to suspicion to outright excitement. In this helpful guide, trusted LDS scholar Matthew B. Brown clearly and skillfully addresses the subject’s history, theology, traditional understandings, and myths. Entering the upper room of Joseph Smith’s red brick store, which was used as a temporary Masonic lodge room as well as a provisional temple, readers consider provocative questions as well as meaningful scriptural patterns and interfaith connections. With research ranging from the particular to the panoramic, this volume offers engaging, edifying exploration of the relationship between the ritual practices of Freemasonry and the blessings of the House of the Lord.

I am very glad to see Matthew Brown tackle a topic that has been avoided for years. He does an excellent job in answering the questions on the origin of the Endowment ceremony, in a faithful manner. Several LDS have given in to the critics and believe that Joseph Smith "borrowed" the ceremony from the masons, but Matthew Brown shows the Endowment ceremony to have existed before Masonry. This lines up with several of Joseph Smiths statements regarding it's origin as being a restoration of ancient ceremonies. Now that we are learning more about what the ancients have done, we are seeing that they performed very similar rituals. This is a great book and would recommend it to anyone. For those who don't like reading, he now has a DVD out on the same subject. Bravo!