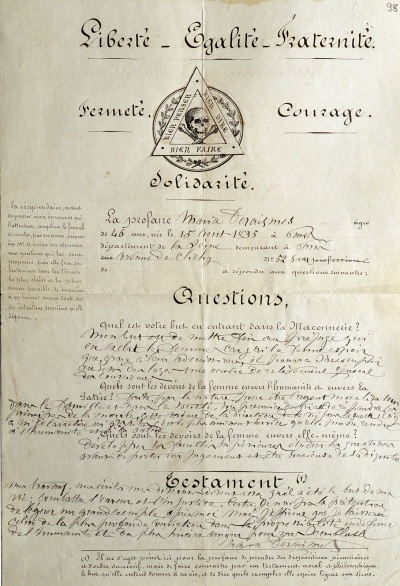 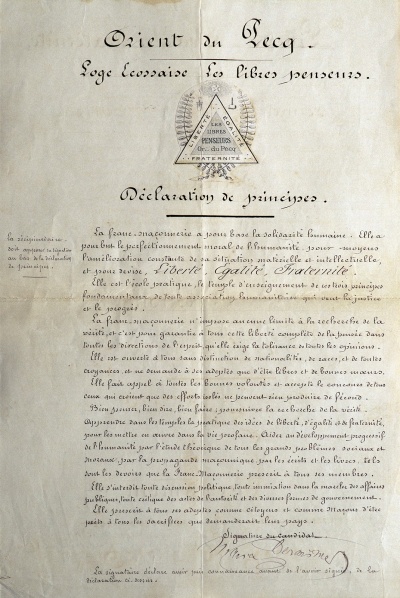 Marie Deraismes’ Masonic Last Will and Testament was returned to the International Order of Freemasonry for Men & Women, Le Droit Humain, in the year 2000 via Moscow & Berlin after having disappeared during the Nazi occupation of Paris. Here’s what our female founder wrote (Google translation into English below):

"This was plundered along with the rest of our files during the Nazi occupation of Paris, he returned to the bosom of the French Federation of Human Right in 2000, after a journey from Moscow via Berlin. The Brothers and Sisters of the History Commission found him with great emotion among the 43 boxes of files restored by Russia.

What is your goal to enter Freemasonry: My goal is to end the prejudice that has excluded women, because I have a strong spirit thanks to its admission may be completed within the lodges a work of general improvement of conscience.

What are the duties of women against Humanity and the Homeland? Created by nature to be the moralizing agent in the family and in society, their first duty is to extend the principles of morality. This measure of direction of life without which no great character or great reason, is the main service you can give to mankind and country.

What are your duties of women from themselves? Develop their spiritual faculties and study issues before judging and worry about your dignity.

"My work, my writing, my discussions, speak enough of which has been the goal of my life: combating error and injustice. Certainly, I have no intention to bequeath a great example after me, but I say that leave the deepest conviction in the capacity of progress (of perfection) indefinite humanity and sincere love to my peers.

This will not find any reference to esotericism, which testifies to the willingness to work well for equality of the sexes and not having any desire for innovation in the esoteric domain.

The same spirit is found in the proposals of the V:. M:. of the lodge "Freethinkers" Brother HOUBRUN, who, having given birth to Sister Mary Deraismes, stated:

'Too long, in our view, our mothers, our wives, our daughters, our sisters, have been out of our meetings that were said were made mysterious alleged facts should be impenetrable for women.

But we think that in our time, this exclusion was a measure obsolete, while an injury that made them, in what concerns us, we have resolved to end. We have taken the view that the normal state of society can not truly improve without the help of women, the primary educator of children and prejudices destroy it by fighting them moral and Masonic light, was preparing peacefully true emancipation social .....

... Remove the veil that hides the Freemasonry in the eyes of women and invite them to our meetings in footing of perfect equality after having started our mysteries, we thought it was a useful attempt, convinced that their intellectual emancipation, through our institution, is so he can substantive consideration of the errors and prejudices of all species, engendered by ignorance and encouraged by all clerical sects for their own benefit.

We believe, whatever they say many stakeholders, our opponents, the intelligence of women is equal to that of men and that, like us, have the right to be part of the work of the Freemasons, the propagators of progress by the study of the positive sciences, source of all light and truth. We had the honor to make the ideas we profess starting today in our association, most eminent women of our time, Miss Mary Deraismes, the wise speaker, so honorably known to all who devotes his life and talents in a way so generous to the exposition of the doctrines progressive and humanist anticlerical.

The Freemasons "Freethinkers" are happy to now give the name Sister respectfully and express his appreciation for agreeing to negotiate firmly Masonic barriers now leaves behind her open to women who come to us to work for the good prepared by common intellectual emancipation.' "

(thanks to Bro. Campos and Lodge Constancia of our Spanish Federation!)