En: The Rose of Minden 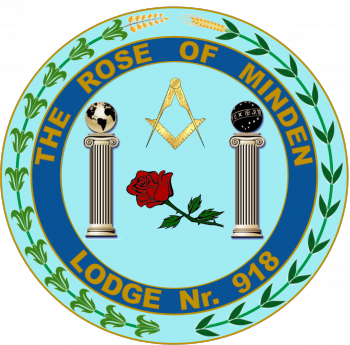 The Rose of Minden Lodge number 918 was consecrated in the Temple of lodge “Zur Roten Erde 524”, in the Gesellschaftshaus, Unter den Linden 34, Herford, on 28th. October 1972.

After meeting for some years at Minden, the lodge now meets (back home), in the Temple in which it was Consecrated.

The name of the lodge, “The Rose of Minden”, was chosen to commemorate the actions of the soldiers of the six British Infantry Regiments that took part in the Battle of Minden, on 1st. August 1759, when it is recorded, that they picked roses, which “grew abundantly on the battlefield”, placed them in their head-dresses, and that the “20th went into action with roses in their hats”. Roses subsequently became an accepted emblem of association with the Battle of Minden.

The Battle of Minden was fought during the Seven Years War. The armies of Prussia and Britain were allied against the army of France. After the French defeat at Minden, their colonial armies were largely returned to France, for the defence of the homeland, thus enabling Britain to take over control, in Canada and India.

The 20th. Regiment of Foot (Kingsley’s Regiment – later The Lancashire Fusiliers, and later, (1968), part of the Royal Regiment of Fusiliers), had an attached masonic lodge, Lodge 63 (later named Minden Lodge), on the roll of the Grand Lodge of Ireland. Minden Lodge 63 of the Irish Constitution was Warranted on 12th. January 1737, a duplicate Warrant issued on 20th. December 1748. The Lodge was erased on 5th. November 1801, revived on 6th. February 1812, but marked as (Not working) in 1869.

The Rose of Minden Lodge conducts its “work/ ritual” in the English language and follows the English masonic constitution and traditions. However, our membership is very much international, naturally we have members from British backgrounds, but we also have a large contingent of German nationals and representatives from various other parts of the world we are proud to call Brothers.

Source: Lodge "The Rose of Minden"