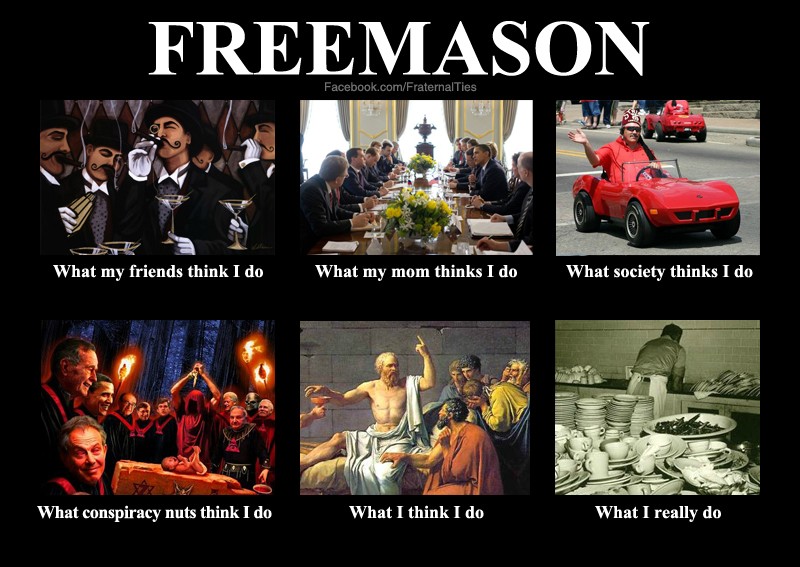 On the lighter side …

Nothing wrong with a hearty laugh every now and then so some (mostly) American lodges reserve a section of their website to Masonic jokes. 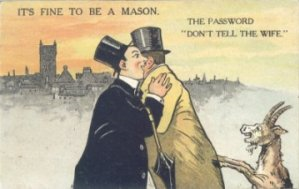 Bob and Bill were brother masons and great friends for most of their lives. Each had agreed that when one of them passed on to that Grand Lodge above, he would attempt to make contact with the other and tell him all about what heaven was like.

As so happened, Bill went to heaven, first. One night Bob was just drifting off to sleep when he heard Bill's voice calling to him.

"Is that you, Bill?"
"Yes, Bob. I am honoring our agreement."
"Oh, MY,.... what's it like?" Bob asked with some anticipation.
"It's like nothing you could ever imagine. The lodge here is fantastic,... better than any lodge we ever saw on Earth. The meetings are always well attended, the ritual is letter perfect, the friendship nights always have tons of new people just itching to join, and the spirit of fellowship blankets the entire place."

"Oh, my, it's just like we'd hoped. I'm so happy for you. But I have to ask,... that sounds really great, but you didn't really seem all that excited. What's wrong?"
"Well, I have some good news and some bad. The good news is that we're raising a fellow to the third degree next Wednesday."
"That's fantastic. What's the bad news?"
"Your name is on the list to be the Senior Deacon."

One night (a long time ago in a jurisdiction far, far, away) a brother was heading home after indulging a bit too much at the festive board after his lodge meeting. He was weaving a little across the path, steadying himself against the lamp-posts. A concerned policeman saw him, and walked over.

At 9 o'clock one evening outside Freemason's Hall in London a police sergeant was instructing a young police cadet on how to increase his arrest rate.

He advised the young man that after Masonic meetings, the Brethren invariably drank too much at the Festive Board and frequently attempted to drive home afterwards.

Sure enough, after a short wait, a man came staggering and swaying down the steps, almost fell, recovered and lurched towards a parked car. His progress was slow and, whilst he was making his way towards his vehicle many other Freemasons passed on their way.

But, our officers of the law had him in their sights and ignored all the other brethren. Finally he reached his car, took out his ignition keys and, after several attempts, managed to insert the key into the driver's door and lurch into the driving seat.

At this point the coppers pounced ... "You're under arrest for being drunk in charge of a motor vehicle said the sergeant" The Freemason turned a stone cold sober face towards the policeman and said "but I haven't had anything to drink all day."

The poor sergeant seeing this sober individual in front of him was thwarted, but puzzled "But ... but ... you've been to a Masonic meeting and to the festive board haven't you?" To which our man assented. "Of course" he said "I occupy a very important office in the lodge ... I am Senior Decoy!"

Q: How many Masons does it take to screw in a light bulb?
A: Three. One to screw it in, one to read the minutes of the previous light bulb replacement, and one to sit on the sidelines and complain that this wasn't the way they USED to screw in light bulbs.

A small Lodge had had a string of bad luck. It was preparing to initiate a candidate on a steamy evening in June and it′s air conditioner had stopped working. After sweating their way through part of the work, the Master had asked the candidate what he most desired.

The candidate replied "a beer".

At this juncture, the W.M., being startled, whispered "light" to the candidate.

A Doctor and Plumber are in the same Lodge. On Sunday Morning the Doctor wakes up to find his toilet blocked. So he rings the Plumber.

"But I don′t work Sundays! Can′t it wait until tomorrow?" the Doctor said.
"I don′t like working Sundays either but if you were in trouble, and felt unwell, Brother I would come round to see you."
"OK" says the Plumber and goes round to the Doctor. Goes upstairs and looks at the toilet, take two aspirins from his pocket and throws them down the bowl.
There he says "If it′s no better tomorrow give me a ring and I will call round."

While visiting a newly initiated brother at home one day, the new brother′s wife took me to one side and said her husband had started behaving very strange since joining.

I asked in what way?
She said that he locks himself in the toilet for hours on end mumbling to himself with his little blue book.

Later that evening I turned the talk to lodge, and asked him how he was getting on.

Oh fine was his reply.
I asked him about his behavior and if there was anything wrong.
No, was his reply.
So why read the book there?
Well he said "It′s the only TYLED room in the house"....

Bro. John and Bro. Mike are getting dressed and ready for a lodge meeting. When John takes his apron out of the case, Mike notices a pair of silk stockings unrolling and hanging out of the case.

Mike asks: "I say, John, what′s this with the ladies stuff?"
John gives a quick look and whispers: "You remember the installation meeting last year?"
Mike acknowledges and John goes on: "Keep it a secret, but on the way home I stopped at the pub where I met this lovely woman. Apparently she lost her stockings in my car, and my wife found them. I told my wife I was passed to a higher degree, and ever since she takes ′m out of the case washes them and puts them back in with my gloves!"

A little before Lodge is about to open an old man totters up to the Tyler and says,

Well, they all look at this guy, who really is older than dirt, and they ask him to explain.

So they go scurrying for the records, and sure enough, there was his name, entered on July 4, 1922.

"Where have you been all these years? What took you so long to be ready for your 2nd?" they ask.
He replied: "I was learning to subdue my passions!"

A young Entered Apprentice was being tested on his proficiency. After going over the signs and passwords, he looked at his tester and asked, "I noticed several of the older members sticking their fingers in their ears and whistling. What does that sign mean?" "That's not a sign," his tester said, "Those are Past Masters adjusting their hearing aids."

A Mason is on a Business Trip. One day he comes to a small village, somewhere in the north of England. Our Brother is curious to know whether there is a Masonic Lodge or not, so he takes a walk through the village and after some time he finds a path called "Mason's Road".

Thinking that the path might lead to the Masonic Temple, he follows it. At the end of the pathway he sees a building, which looks somewhat rotten and seems to have been out of use for quite a while. Our Brother tries to open the door and, surprisingly, it is not locked.

He goes inside and finds dust and spider webs everywhere. In front a door there sits a skeleton, wearing an apron , a collar and holding a sword in its hand.

"O my God", thinks our Brother and enters the Lodge room. In puzzlement, he sees skeletons with collars and aprons everywhere. The W.M., the Wardens, the Organist, Deacons - all skeletons. He looks around and goes to the seats of the Secretary and Treasurer.

Under the hand of the Treasurer he finds a small piece of paper, a little note, which he seems to have passed to the Secretary. So our Brother picks up the note, blows away the dust and reads:

"If nobody prompts the W.M., we will sit here forever!"

More masonic jokes brought to you by